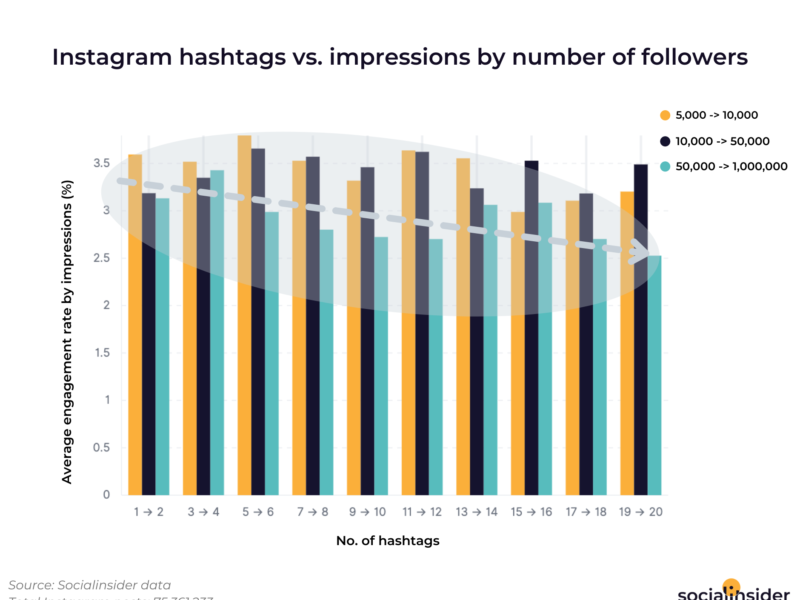 This announcement generated a lot of fuss on social media, as social media specialists have to rethink their marketing strategies moving forward.

While they all came to the same conclusion – that Instagram hashtags don’t affect post views – we wanted to test this hypothesis with the help of data.

We analyzed 75,361,233 Instagram posts published between March 2021 and March 2022 to see whether Instagram hashtags play a role in post views, calculated as the average engagement rate by impressions.

Let’s see what the data says! 👇

What is the relationship between Instagram hashtags and posts’ views?

In one of his recent Instagram stories, Mosseri answered a question from a user about whether “hashtags help views.”

His answer was “not really.”

The argument behind his response was that Instagram hashtags help users understand what a post is all about, but it’s not necessarily a strategy for getting more distribution.

This new information, especially when coming from the head of Instagram, changes the whole social media scene, as social media specialists want to know how the platform works and how they can reach more people.

Mosseri’s statement was further taken by Matt Navarra, social media consultant, and discussed in a poll on LinkedIn.

Interestingly, 53% of the respondents answered that the main reason for using Instagram hashtags is to boost reach/post views. 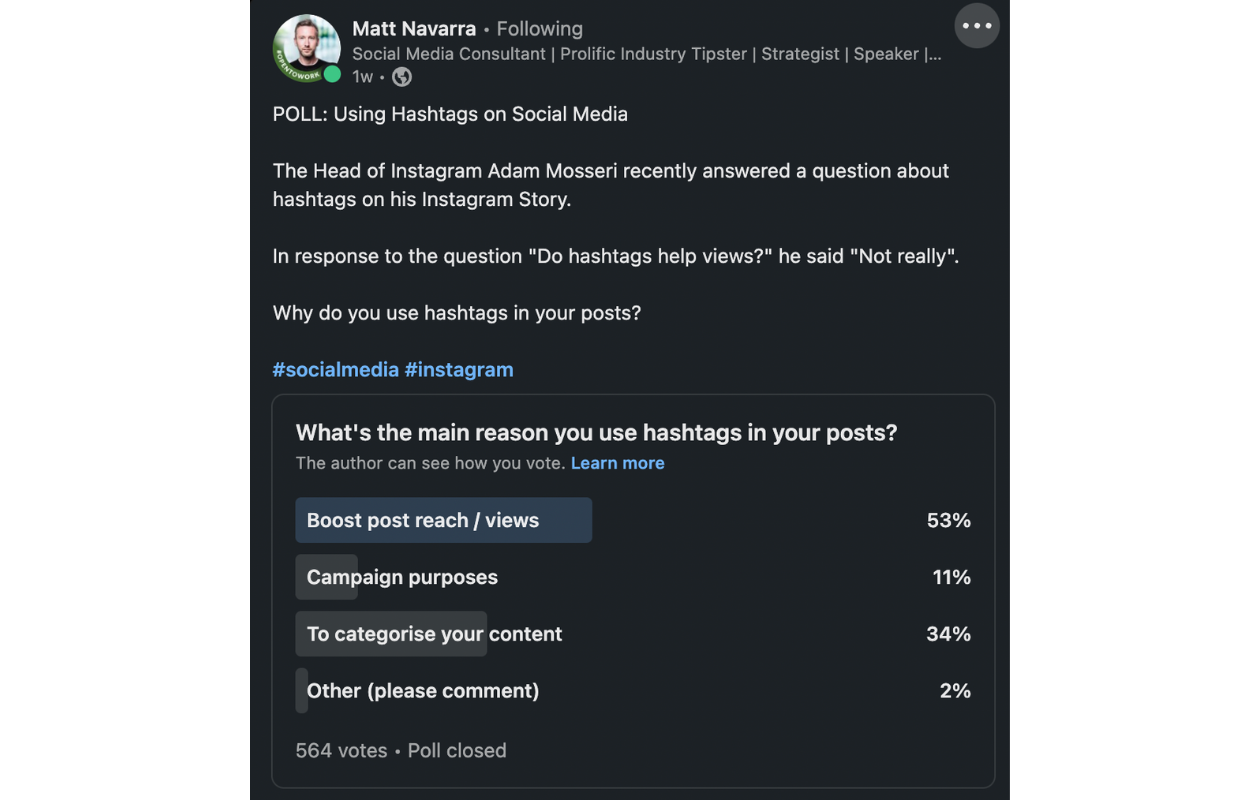 While this makes sense to some extent, since hashtags help with content discoverability and organic searches (especially when they have a big following), users’ tendencies are not always reflecting how algorithms truly work.

Jenn also commented on this theory in one of her Instagram posts, and she takes it even further.

According to Jenn, there have been a lot of changes recently in how Instagram hashtags work.

Because Instagram is trying to change the platform into a search destination, they introduced keyword search.

Instagram keyword search works by allowing users to type in a keyword such as “home office inspiration” rather than being limited to a hashtag like #homeofficeinspiration.

As a result, we see decreased hashtag performance because people are typing in a keyword/phrase, but they’re not navigating on the hashtags page as they did in the past.

So you’re still getting post distribution, but you’re not necessarily seeing it in the hashtag results.

If you want to be successful on Instagram, you still need to use hashtags, but you need to use them strategically. 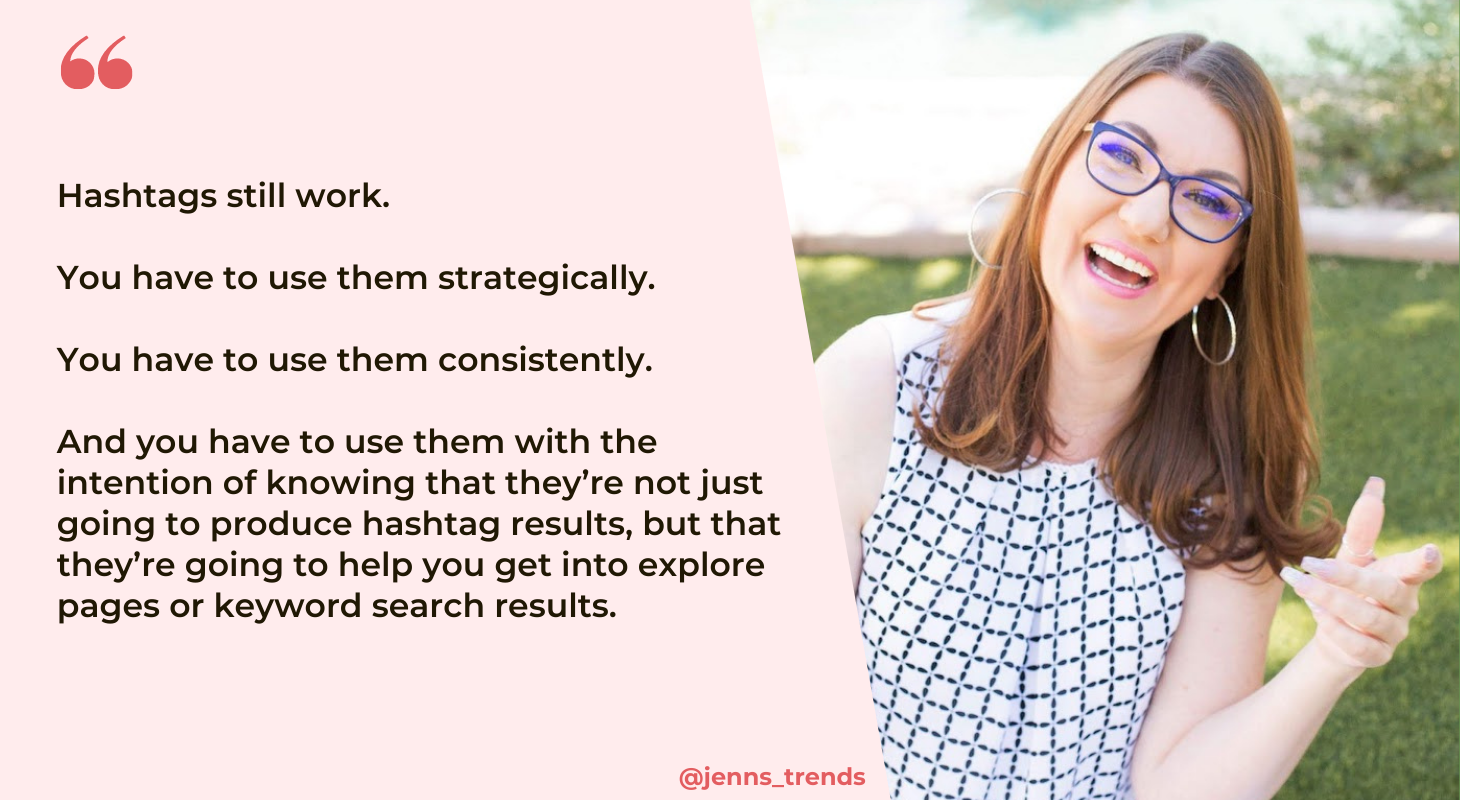 With all these discussions in the digital space, we wanted to test his hypothesis with the help of data. 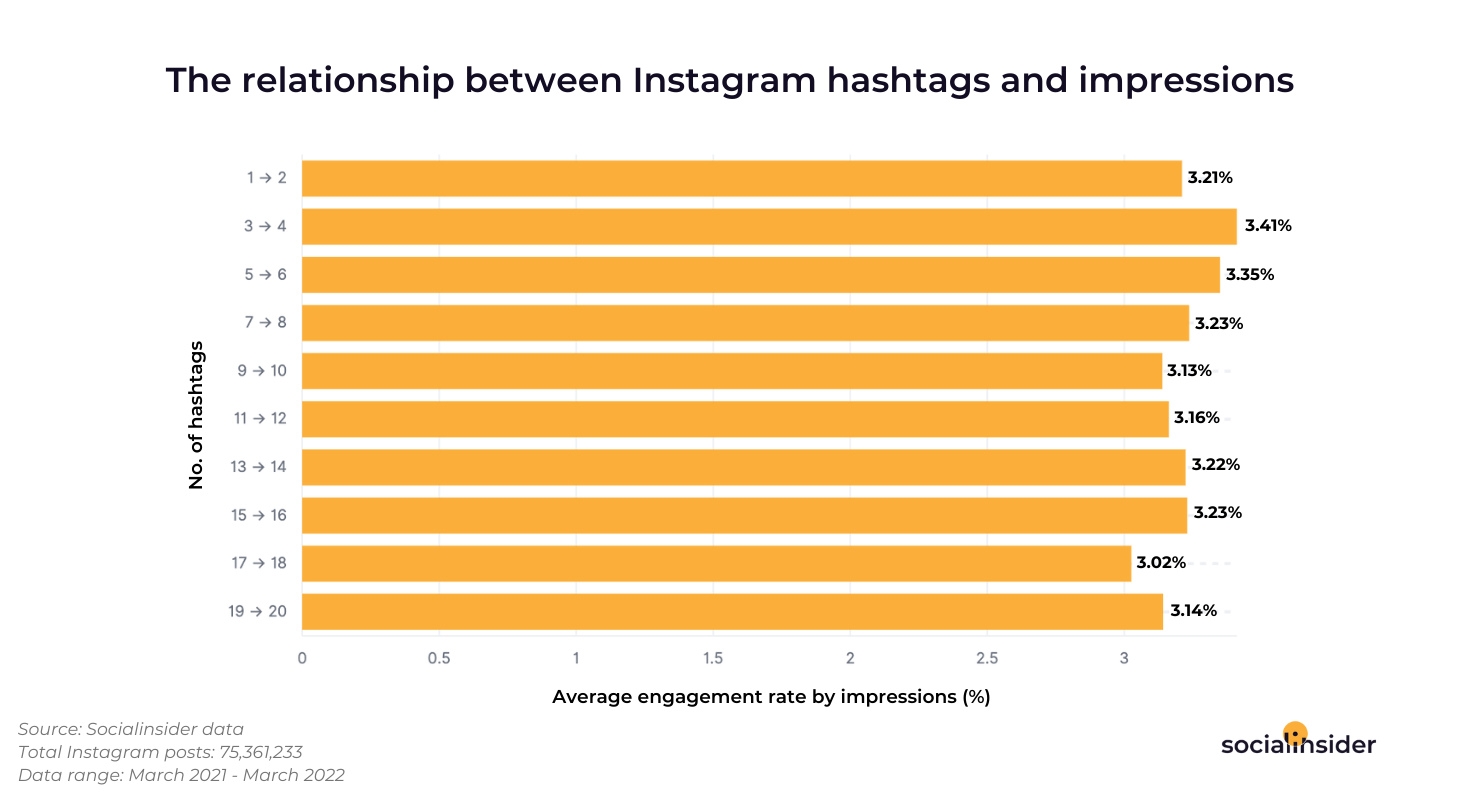 As the graphic suggests, the number of hashtags a post has doesn’t really influence post distribution, which we calculated as the average engagement rate by impressions.

The data shows no significant differences in the average engagement rate by impressions of the Instagram posts analyzed, regardless of how many hashtags those posts have.

The highest average engagement rate by impressions (3.41%) is attributed to Instagram posts with 3-4 hashtags, which is in line with Instagram’s recent recommendation to only use between 3-5 hashtags.

📌 So for your future Instagram hashtags strategy, you could try and test this by sharing posts with 3-4 hashtags and posts with more than five hashtags and see if there are any differences in impressions rates.

Because we wanted to go more in-depth in our analysis and make sure we’re looking at equal comparisons, we decided to add one more pillar: the number of followers.

According to the data, there aren’t significant differences in the average impressions rates of the Instagram posts analyzed concerning the number of hashtags and followers.

Let’s have a look at the graphic below. 👇 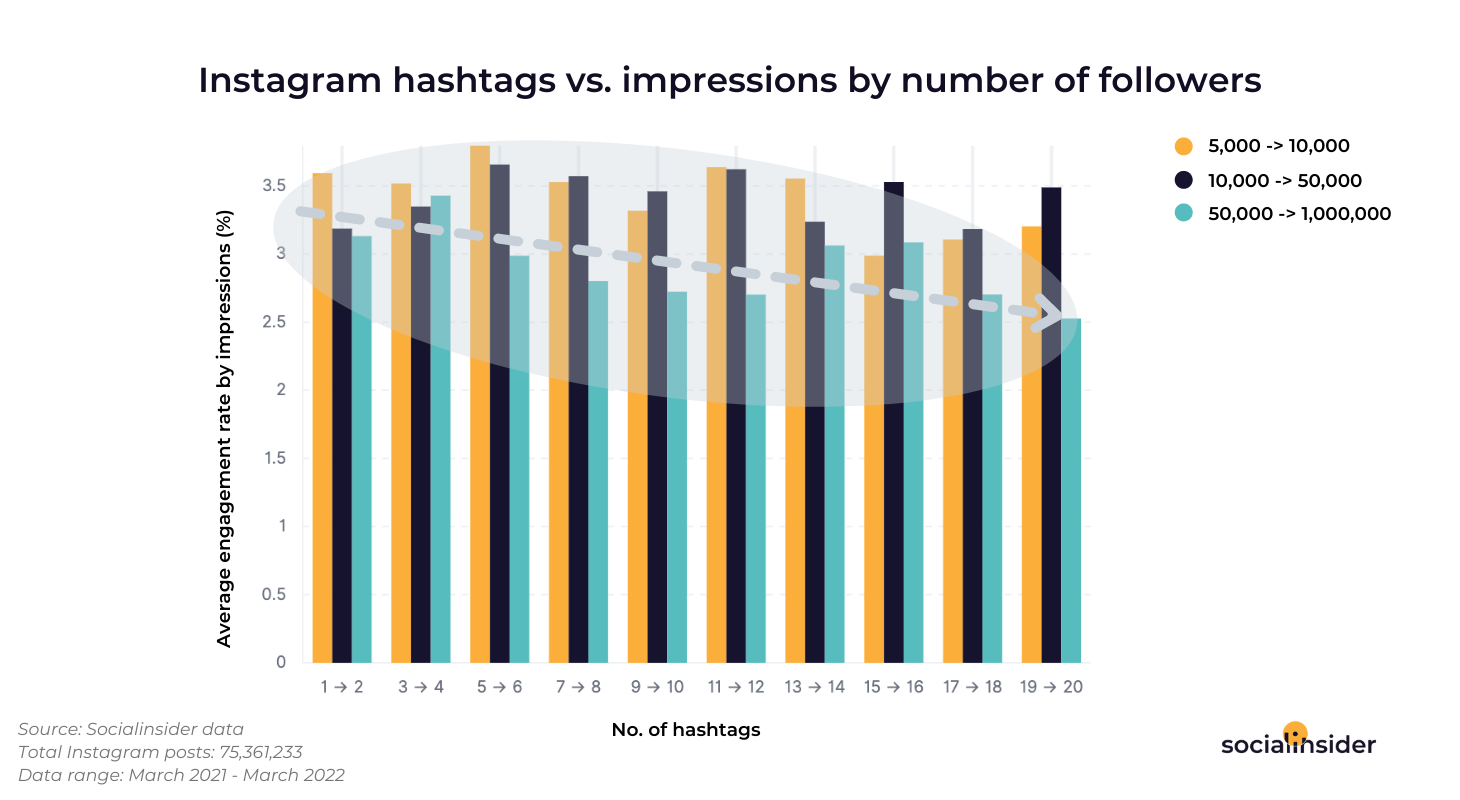 The only noticeable trend is for the accounts with 50K – 1M followers.

The graphic shows that their impressions rates decrease as those accounts use more hashtags.

👉 If higher accounts use more than four hashtags, they’ll get a lower impressions rate.

For small accounts (5K – 10K followers), the trend is also slightly decreasing, but the differences aren’t as evident as in the case of big accounts.

To increase their chances of scoring higher impressions values, small accounts should include an average of 5-6 hashtags in their Instagram posts to reach an average engagement rate by impressions of 3.79%.

This also applies to mid-sized accounts (10K – 50K followers). They get a higher impressions rate (3.5%) if they use more than five hashtags.

So, to sum up the findings of these Instagram analyses, it’s safe to say that the number of hashtags you use in your Instagram posts doesn’t affect the posts’ distribution. 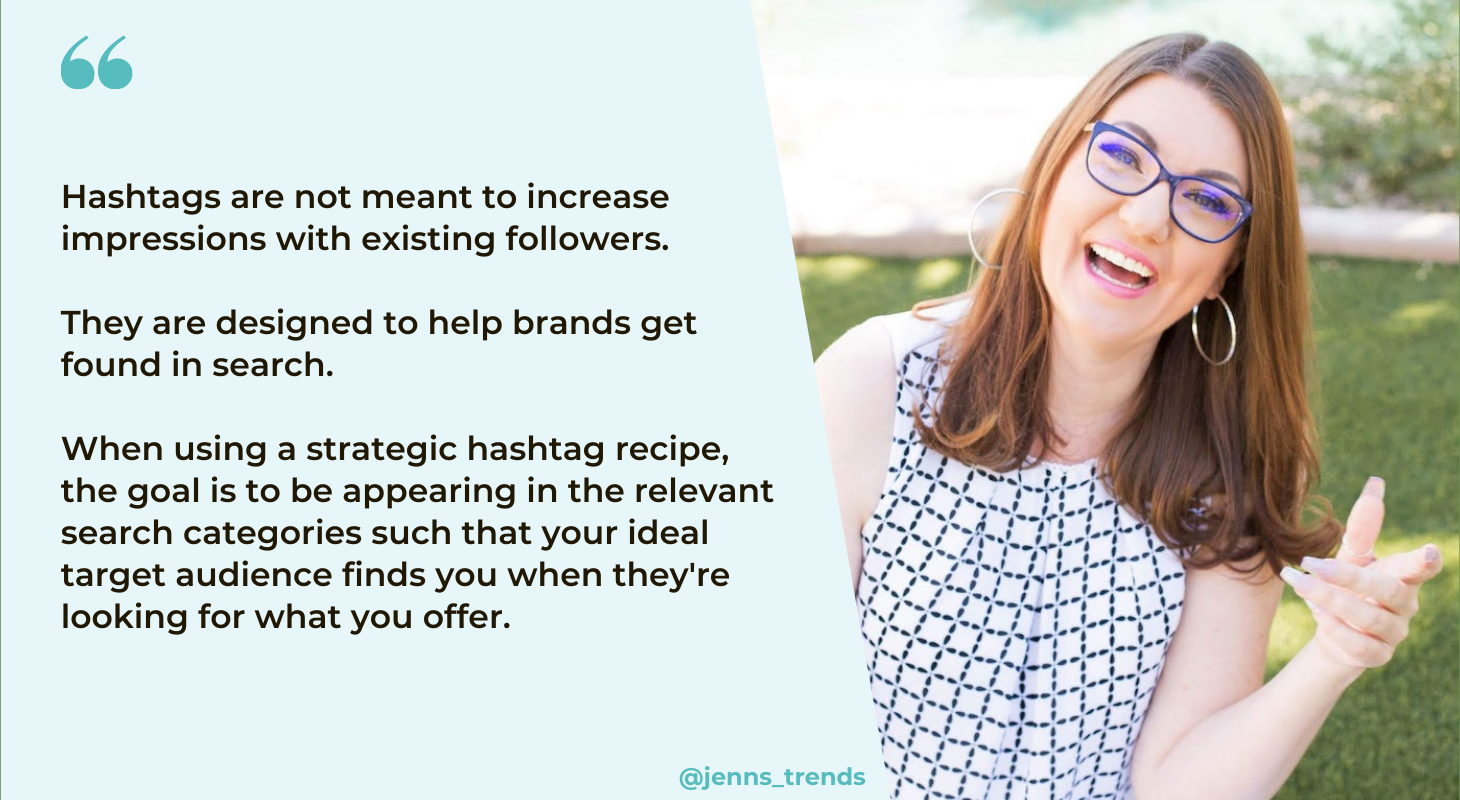 However, using hashtags as part of your Instagram strategy is still important, as they help with discoverability.

Depending on the size of your account, you should use 3-4 or 5-6 hashtags on average to maximize your chances of obtaining information with higher impressions rates.

The Instagram profiles analyzed in this case study have the following base between 5K – 1M followers.

We split the graphic by followers count; we selected three intervals:

The average engagement rate per post (by impressions) on Instagram is calculated as the total engagement (likes and comments) divided by the number of posts the profile published. The result is then divided by impressions, and all multiplied by 100.

Impressions = the number of times your content is displayed. 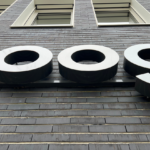 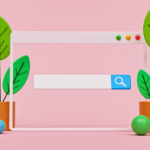